Those NASCAR fans who stayed awake into the early morning hours of July 6th to catch the conclusion of the Coke Zero 400 at Daytona International Speedway witnessed Austin Dillon’s horrific last-lap crash.  Dillon’s No. 3 car went airborne into the track’s “catch fence” and broke into pieces, sending debris flying towards fans seated near the finish line.  Amazingly, Dillon emerged from the car with only a bruised forearm and tailbone, and of the 13 spectators hit by debris, only one was taken to the hospital (and that spectator has since been released). 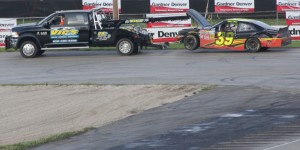 After winning the race from the pole, Dale Earnhardt Jr. was too worried about the wreck to enjoy the victory.  Earnhardt Jr. is no stranger to last-lap crashes at Daytona, having lost his father in one back in 2001.  Earnhardt Jr. admitted to being “near tears” after seeing the wreck in his rear-view mirror, and he repeatedly asked about the safety of the driver and those seated in the grandstands as he made his way to victory lane.  Six-time Spring Cup Series champion Jimmie Johnson shared Earnhardt Jr.’s concern, stating after the race that he “expected the worst” and how he was “shocked” that Dillon was able to survive such a violent crash.

Dillon’s crash was eerily similar to Kyle Larson’s last-lap crash at Daytona in 2013, which sent a tire flying into the stands and debris as high as the upper deck.  Larson’s crash injured over 30 spectators, including one who suffered a shattered fibula and a severed Achilles tendon.

Fans attending sporting events should be wary of the dangers associated with sitting close to the action.  Referencing a century-old legal principle known as the “baseball rule,” courts generally take the position that fans assume the risks inherent to the sport.  In other words, fans injured at sporting events usually face an uphill battle in trying to hold the team or venue responsible for injuries sustained during the course of the game.

Just last month, Red Sox fan Tonya Carpenter was nearly killed after being struck in the head by a broken bat at Fenway Park in Boston.  Currently undergoing extensive rehabilitation, Carpenter is relearning how to walk and talk.  However, because she had a duty to keep a lookout for objects flying off the field and into the stands, the “baseball rule” likely impedes her ability to recover anything from the Red Sox or Major League Baseball.

North Carolina courts also recognize the “baseball rule.”  Baseball venues must simply provide a sufficient number of screened seats behind home plate to accommodate as many fans as may reasonably be expected to call for them on ordinary occasions.  By purchasing tickets in sections that are not protected by a screen, fans essentially sign a contract agreeing not to sue for injuries sustained by objects leaving the field of play.

Regardless of whether you are following Rory McIlroy’s group at the Quail Hollow Club, attending a company outing at BB&T Ballpark for a Knights game, or taking in the All-Star Race at the Charlotte Motor Speedway, remember that you are assuming the risk of getting injured.  Sitting close to the action may provide a better view, but it also places you squarely within the zone of danger.  Take reasonable precautions for your safety by either paying close attention or sitting far enough away so objects are unable to reach you.

Although Daytona’s reinforced “catch fence” did its job early Monday morning by preventing Dillon’s car and most of its debris from reaching the fans, the result could have been much worse.  NASCAR should consider making additional safety improvements to ensure that its fans are protected at its fastest racing venues.  Sports columnist Scott Fowler of The Charlotte Observer has proposed slowing the cars down on these super speedways and moving fans farther away from the “catch fence.” Following his advice would be a step in the right direction for an organization that is all too familiar with its wrecks producing tragic consequences for both drivers and fans alike.

A wrecker towing the wrecked car of w:Ryan Sieg Nationwide car after the running of the 2014 Gardner Denver 200 at Road America.