Even before Black Friday 2016 hit, personal injury attorneys across the nation (including ourselves) had enough cautionary tales to fill a book with the horror stories that routinely befall shoppers on the busiest shopping day of the year. 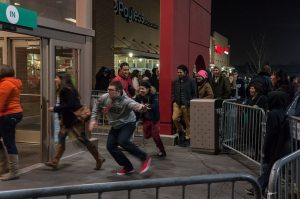 Personal injury and even death routinely abound, and this year was unfortunately no exception.

In a tragic keeping with tradition, this year’s deaths occurring amidst Black Friday crowds both occurred at different Wal-Mart locations. One man was shot and killed in the parking lot of a Reno, NV Wal-Mart in an argument over a parking spot. In San Antonio, TX a second man was shot and killed when he intervened after seeing a man beating his girlfriend amongst the throngs of Black Friday shoppers in the Wal-Mart parking lot.

Although the chain megastore obviously cannot be held liable for such unrelated criminal acts committed by its customers, Wal-Mart and has faced numerous lawsuits in the past for how plaintiffs say it incentivizes large crowds to assemble at its Black Friday sales and then fails to adequately handle the masses of customers.

For example, a Fort Scott, Kansas woman who said she was trampled at a Black Friday Wal-Mart sale in 2013 sued the retail giant. Amanda DuVall said she was shoved from behind, knocked on the ground and stomped by other customers rushing to get the $49.99 tablet Duvall and others had queued up for.

Duvall’s lawsuit charged that Wal-Mart knew from past experience with Black Friday madness that crowd-control and heavier security were necessary to control its crowds that have often turned violent.

It’s a solid point. Some of the most infamous Black Friday personal injury suits have come straight from various Wal-Mart stores throughout the country.

Take, as another example, the 2008 case of 34-year-old Jdimytai Damour from Queens. A seasonal worker for Wal-Mart, Damour was trampled, asphyxiated and killed by a horde of Black Friday shoppers.

His family brought a wrongful death suit against the retailer. After an investigation, police concluded the responsibility for the out-of-control crowd lay with the store. Wal-Mart administrators should never market a sales event, the police said, without having a plan and proper resources to manage it.

The case for Damour’s death went to the District Attorney’s office. It never went anywhere. Wal-Mart cut a deal with the District Attorney to improve its safety and crowd-management plans for post-Thanksgiving sales in exchange for the criminal investigation being dropped. As a part of the face-saving bargain Wal-Mart also created a $400,000 victim’s compensation fund and gave $1.5 million to county social service and nonprofit groups.

Had the store been criminally charged, it would have been subject to a $10,000 fine. Instead, Wal-Mart paid only a $7,000 fine to the Occupational Safety and Health Administration (OSHA)—and spent more than $1 million in legal fees fighting having to pay even that.

As the wrongful death lawsuit Damour’s family filed pointed out, Wal-Mart, like many other large retailers this time of year, purposefully creates a competitive atmosphere through its heavy advertising designed to specifically attract large crowds leading up to Black Friday sales. The marketing draws a fine line between hyping up markdowns on certain items while making it clear that “supplies are limited.”  On the day of, the stores do nothing but feed the crowd frenzy. Ribbons are dramatically cut the moment sales begin, leaving the crowds that have been wrapping around the building since the early hours to stampede forward. Security is limited.

When Damour, a 6-foot-5, 270-pound man, was killed, he was working the entrance of the store to assist with crowd control. When Wal-Mart unlocked its doors at 5 a.m., the crowd of roughly 2,000 outside surged forward and, giving a literal meaning to the term “doorbuster,” actually broke down the electronic doors. Damour was stepped on by hundreds of people before other employees were able to clear space to reach him and try to administer aid.

When DuVall was injured in her eerily similar scenario years later—long after Wal-Mart had supposedly upped the ante on its Black Friday security—she was in the process of reaching her hand out to take one of the markdown tablets she had been standing in line for when she said shoppers behind her pushed her to the ground and trampled over her. Wal-Mart settled the case with DuVall for an undisclosed amount shortly thereafter.