Many still remember the terrible accident at the North Carolina State Fair in 2013 that left several people hospitalized for weeks. However, the Wake County District Attorney’s Office determined that the ride’s malfunction was no accident at all. The ride, known as the “Vortex”, malfunctioned and severely injured several individuals at the NC State Fair two years ago. The State determined that the owner of the ride, with the help of his employee, had bypassed certain safety mechanisms on the ride, allowing the ride to operate without the safety bars in place. Because of their actions, the State determined that the parties should be held criminally liable. 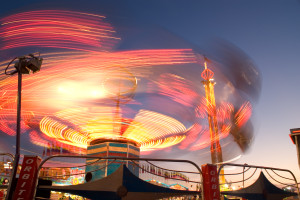 Prior to the fair, inspectors told Josh Macaroni, the owner of the ride, that there were problems with the electrical wiring of the Vortex during a routine inspection. Macaroni was told to fix the issue. Instead of doing so, Macaroni (according to a witness) instructed his employee to stand behind him to block the electrical box from public view while he installed wiring that bypassed the safety mechanism on the ride. He did so to allow people to get off and on the ride quickly and efficiently. Unfortunately, the ride started while some passengers were still unsecured, and it dropped these passengers nearly 20 feet. Three people were seriously injured and remained in the hospital for weeks.

Additionally, four of the injured individuals filed a civil suit seeking nearly $150 million dollars in damages.  The action was likely a negligence suit in which the injured individuals would have claimed that the two men failed to uphold their duty to keep their passengers safe, and that their breach of duty caused the serious injuries. The suit was filed against Tutterrow, Macaroni and Family Attractions Amusement, LLC. The lawsuit was later settled for an undisclosed amount.

So, as the fair begins this year in Raleigh, fairgoers can rest assured of two things: 1) that ride operators and owners understand that they can be held criminally and civilly liable for unsafe rides and 2) that the state of North Carolina will be monitoring these rides to make sure they meet certain safety standards.  Inspectors from the NC Department of Labor will be maintaining a presence at the fair during the entire 10 days that it is in Raleigh.  They will be keeping a close eye on the rides and operators to make sure that this year’s fairgoers are kept safe.

By Gphoto (Own work) [GFDL (http://www.gnu.org/copyleft/fdl.html) or CC-BY-SA-3.0 (http://creativecommons.org/licenses/by-sa/3.0/)], via Wikimedia Commons