This Memorial Day weekend ended in tragedy for the family of one pregnant woman and her young son who both died on High Rock Lake in North Carolina in a terrible boating accident. According to police, the woman and her three-year-old son died when a speedboat crashed into their pontoon boat.

Authorities say Melissa Chambers Britt and her son died in the terrible accident on High Rock Lake, located in Davidson County, NC. According to a police spokesperson, the speedboat that smashed into Britt’s boat was traveling at more than 50 miles per hour at the time of the accident. 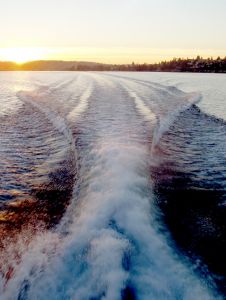 Witnesses say Britt’s husband, William, who was not injured in the accident jumped in the water after the crash to save his wife and young son. The boy was taken to the hospital, but later died of his injuries. Sadly, William was not able to find his wife’s body which was only recovered several hours later by rescue crews. Police say Britt’s brother, Michael Chambers, was also in the boat at the time of the accident was taken by helicopter to a hospital for treatment of serious head injuries.

However, police say that none of the four people in the speedboat driven by Michael Greene were injured in the crash. According to witnesses, Greene became aware of the pontoon boat too late to slow down and tried to turn away but the two vessels were already too close together to avoid an accident. Police say they do not believe alcohol played a role in the accident, but do believe Greene was distracted behind the wheel. Authorities say they will make a final decision about possible criminal charges against Greene next week.

The problem that investigators frequently discover in such accidents is that many boaters are inexperienced and fail to realize their limitations in terms of handling a water vessel. These boaters may enjoy speeding through the water on a hot summer day, but fail to understand that there are safety issues involved in traveling at such speeds, such as someone possibly being thrown overboard if the boat goes over a wave or running into another boat that appears unexpectedly.

Though it did not in this case, alcohol often plays a large role in many boating accidents, as people go out to a lake to enjoy the day and spend it with friend partying and drinking. What many people fail to realize is that boating while intoxicated is often just as dangerous as driving while impaired. Slowed reaction times and poor motor skills make boating drunk a potentially deadly activity. Statistics for 2008 from the Coast Guard show there were 4789 accidents that involved 709 deaths, 3,331 injuries and approximately $54 million dollars in damage to property as a result of boating accidents across the United States.