A group of some 40 students at the University of North Carolina at Wilmington claim that a professor’s posts on his blog and personal web pages constitute harassment. 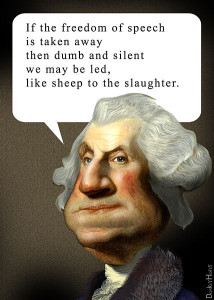 The students claim the professor—criminology and sociology professor Mike Adams—has crossed the line and want something done about it.

According to Slate.com, Adams is a regular contributor to the conservative web site TownHall and has published books including Feminists Say the Darndest Things: A Politically Incorrect Professor Confronts “Womyn” on Campus and Welcome to the Ivory Tower of Babel.

Adams made headlines in 2010 when he sued UNCW, alleging that his application for promotion to full professor was denied because of outspokenness on conservative causes.

In his lawsuit, Adams alleged that his engagement with the community—his speech—was “a substantial or motivating factor” in the University’s decision not to promote him. That, Adams alleged, violated his right to free speech under the First Amendment to the Constitution of the United States.

The courts agreed. In 2011, the Fourth Circuit United States Court of Appeals ruled that Adams’ blogs and statements on web pages and elsewhere were protected by the First Amendment. Punishing him for exercising his right to free speech, the court ruled, violated the First Amendment. “No individual loses his ability to speak as a private citizen by virtue of public employment.”

Greg Lukianoff, president of the Foundation for Individual Rights in Education, hailed the Adams decision as a bulwark against recent efforts by colleges and universities in the United States to censor and limit the speech of students and faculty alike.

The trouble did not end for Adams, however. On his web pages, the professor characterized pro-abortion protestors on UNC-Wilmington’s campus as “animals” who should be caged, according to the Daily Caller.

That offended Hannah Gilles, a member of the Feminist Student Alliance and one of the 40-or-so students who spoke out against Adams. “We were really insulted by being called animals,” Gilles told WWAY.

A spokeswoman for the university said that Adams’s speech was protected by the First Amendment, but student Mikaela Flemming wondered where free speech ends and harassment begins. “Does that mean we have to wait until there is a direct threat?” she asked WWAY.

Quoting Lukianoff, Rebecca Schuman wrote nearly a year ago in Slate that “We must learn to take a deep breath when we hear speech that deeply offends us and remember the principles at stake.” Schuman wrote that she disagreed with Adams’ stances on issues but was glad he won his free-speech case.