The estate of a Michigan man who suffered a fatal heart attack after being frightened to death when he ran into the back of a truck in Dearborn, Michigan in 2008 has settled a lawsuit brought against the trucking company that owned the truck for $300,000. 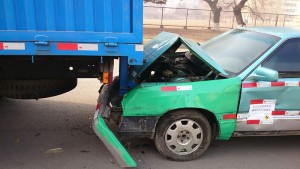 Abdulla Kassem’s doctor, Werner Spitz, testified that Kassem could not see the truck because its rear lights were not visible and because it was raining.

“He doesn’t see the truck. The truck is not visible. He comes to within inches of the back of the vehicle and suddenly—boom—he hits,” Dr. Werner testified. Kassem as 85-years-old at the time of his death.

An attorney for the trucking company—Efficient Hauling Services—called Dr. Werner’s testimony “silly” and “speculative.” A cardiologist and Dearborn police officers testified that it was impossible to know when Kassem suffered the fatal heart attack or what caused it, according to the Daily Mail.

A Wayne County judge dismissed the estate’s lawsuit, but the Michigan Court of Appeals reversed the dismissal last year. Efficient Hauling Services asked the Michigan Supreme Court to intervene in the case, the Daily Mail reports, but in the meantime the case settled. The settlement must be approved by Michigan’s Third Judicial Circuit Court.

North Carolina carved out its own version of “scared-to-death” litigation, also spawned by a 2008 incident that the courts did not resolve until this year, albeit in the federal criminal courts.

A metal detector coupled with an automatic, locking bulletproof lobby door turned back would-be bank robbers Larry Whitfield and accomplice Quanterrious McCoy. Their plan to rob the Gastonia, North Carolina Fort Financial Credit Union on September 26, 2008 ended before they even made it through the door.

The pair—armed with a .357 revolver and an AK-47 rifle—fled in a white Crown Victoria, but somehow got the vehicle stuck in a highway median in the pouring rain. McCoy was apprehended almost immediately, but Whitfield fled into a nearby neighborhood.

He broke into the home of Mary Parnell, a 79-year-old grandmother. Whitfield asked Parnell to accompany him from a hallway into a nearby room, where Parnell suffered a fatal heart attack.

Eventually Whitfield was arrested, charged and convicted of bank robbery. He was sentenced to serve twenty years in prison, receiving a sentence enhancement because, as prosecutors alleged, he forced a “person to accompany him without the consent” of that person—that person being Mary Parnell.