A waiver was not enough to protect a New Jersey waterpark from a lawsuit for gross negligence by one of its patrons injured in an accident there, a judge has ruled. 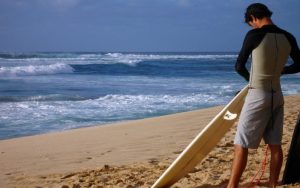 When Roy Steinberg climbed aboard the FlowRider in 2010 at Sahara Sam’s Oasis Indoor and Outdoor Water Park, he had no idea it would be the last time he would have full control over his limbs. The ride attendant didn’t say anything about specific safety risks and the park’s employee only gave the riders minimal instructions on how to use the surfboard simulator. There were signs from the ride’s manufacturer on display from 2007, but they looked like the run-of-the-mill fine print your eyes are trained to ignore.

So Steinberg stood on the imitation surfboard and took hold of a balance rope, held on the other end by a park employee, with both hands. Moments later, the ride started, sending a sheet of water meant to simulate an ocean wave. Steinberg slipped and fell, hitting his head and causing a catastrophic injury to his spine. He is now an incomplete paraplegic, meaning some motor or sensory function remains but that for all intents and purposes, his limbs are paralyzed.

This left the Steinbergs with one option: to sue the waterpark for gross negligence. Such a claim involves a much higher threshold than that for simple negligence, where the plaintiff (the injured party) must prove that the defendant breached the standard of care they owed the plaintiff (which is usually one of reasonable care). Instead, in a gross negligence claim the plaintiff must show that the defendant’s injury-causing behavior was excessively reckless, to the point that it exceeded all bounds of what is considered societally acceptable.

Two lower courts ruled that the waterpark’s misconduct alleged by the Steinbergs did not amount to gross negligence, and dismissed the case. After two appeals, the state’s highest court finally held that a jury could reasonably find that the park’s alleged conduct rises to the level of gross negligence.

The court made its decision based on the following findings: before the FlowRider went into operation, the waterpark had received an updated 2008 manufacturer’s manual. It recommended that parks post new signage that included more explicit safety warnings and pictorial displays. Novices using the ride were also supposed to lie, rather than stand, on the board. Anyone using the balance rope held by a park employee was supposed to do so one-handed.

Of course, the Steinberg’s claim may still fail—that will be up to the jury if the couple doesn’t reach a settlement before trial.

Can you sue for tripping and falling?