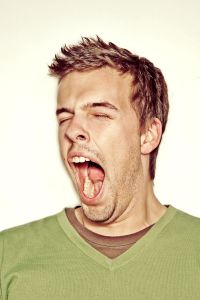 A recent poll conducted by the AAA Foundation demonstrated results similar to those from the National Sleep Foundation Polls, which showed that a large percentage of Americans report driving under the influence of sleep. The most recent poll showed that one-third of those surveyed admitted to driving drowsy in the past 30 days. A 2005 NSF poll of approximately 1,000 people found that 60% of drivers, or about 168 million people, admitted that they had driven while sleepy in the preceding year; and 37% confessed that they had actually fallen asleep behind the wheel.

Though many people know that sleepy driving isn’t a good thing, they don’t understand just how dangerous it can be. Educating people to the dangers of drowsy driving is a key step in preventing unnecessary injuries. The National Highway Traffic Safety Administration estimates that 100,000 crashes that are reported to the police each year are the direct result of fatigue and sleepiness. There’s no reason for such an enormous number of accidents to take place when simple steps can be taken to eliminate the risk.

The root of the problem is that many American are chronically sleep deprived. According to a study published in The Lancet, a quarter of all adults admit to not being happy with the amount of sleep they get each night. The results show that approximately 10% of adults meet the criteria for full-fledged insomnia.

The dangers of insomnia are great, especially for those on North Carolina roadways. Study after study has shown that those suffering from insomnia have symptoms similar to those suffering from severe sleep deprivation. Such sleep leads to an increased risk of accidents. Those who are surviving on much less sleep than they need are more likely to nod off at the wheel, especially when they’re driving alone or for long distances, increasing the risks of serious accidents and the possibility of causing harm to others.

Even those without insomnia who are simply tired are at increased risk of being involved in an accident while behind the wheel. Fatigue while driving can cause the following:

• Impaired reaction time, judgment and vision.
• Problems with information processing and short-term memory.
• Decreased performance, vigilance and motivation to focus on the task at hand.
• Increased moodiness and aggressive behavior while on the road.

We all need to be more aware of the danger of drowsy driving and do what we can to reduce the number of driving accidents each year associated with sleep deprivation. If you, or someone you know, have any questions regarding personal injury claims, please feel free to contact the experienced car wreck lawyers in Charlotte, NC at Arnold & Smith, PLLC for a free consultation. Call at 704-370-2828.