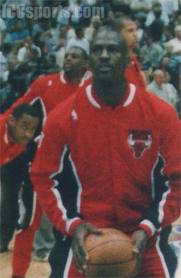 The scene was akin to Black Friday chaos when Michael Jordan re-released his Air Jordan XI Concord sneakers. Shoppers lined up in droves to purchase the shoes and the police were called to several locations to keep the crowd in check. The Charlotte Observer reported that police were called to three malls in North Carolina to quell the riotous masses.

People began arriving at the stores early in the morning on Friday, December 23. The stores were allowed to sell the shoes starting at 5:00 AM, but several customers were lining up hours ahead of time. “There were people crying, screaming. People were running around, pushing. … Unbelievable. A lot of cursing,” said Numar Betris who was fortunate enough to purchase a pair at SouthPark Mall.

At Carolina Place Mall, shoppers reported that the crowd began getting extremely aggressive. There were three stores in the mall that were selling the shoes and the eager shoppers went charging through the store like bulls when the doors were finally opened. At least one person lost her shoe in the mêlée. The malls weren’t the only places slammed with crowds. Police were called to several shoe stores around North Carolina where shoppers reported being pushed and shoved attempting to buy the new Jordans.

If anyone suffered injuries from the chaos in the lines, those injuries could be the foundation for a personal injury lawsuit. One potential problem is that the plaintiff filing the suit may have a difficult time proving causation. The theory of liability would be negligence, but the plaintiff would have a hard time pinpointing which one of the hundreds of shoppers caused the plaintiff’s injuries.

The element necessary for proving a negligence case are duty, breach, actual and proximate cause and damages. It could be argued that every person had a duty to conduct him or herself in a way that did not endanger another person. If the plaintiff was injured as a result of another shopper’s behavior that qualifies as a breach of that duty. The resulting injuries are the damage but the causation element would be tough to prove, possibly preventing the plaintiff from mounting a prima facie case of negligence.

To collect damages for your injuries you’ll need the help of an experienced Charlotte personal injury attorney. The attorneys are Arnold & Smith are well practiced in the area and will work hard to get you the results you deserve. If you require assistance or have questions about a possible injury claim, please contact the attorneys at Arnold & Smith, PLLC today at (704) 370-2828 for a free consultation.