A 22-year-old mechanic from Lexington, NC was killed last week after a tractor-trailer fell on top of him while working at JRJ Trucking in Thomasville. According to Davidson County Emergency Services, the accident was reported just before 6 p.m. last Monday.

The worker, Paul Peterson, was pronounced dead at the scene of the accident according to the county’s medical examiner. Peterson was working under the front end of the tractor-trailer when it collapsed on top of him and pinned him. A coworker was nearby when the accident happened and rushed to call 911. Police say that other workers in the facility came to help Peterson but that everything happened so quickly and the truck was so heavy that they were not able to extricate him before emergency crews arrived. 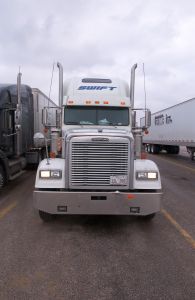 The North Carolina Department of Labor has announced that it is launching an investigation into Peterson’s death and so far does not know exactly what caused the tractor-trailer to fall on top of the young man. Such investigations are standard procedure when there has been a death in a workplace. The DOL will investigate to see if the company, JRJ Trucking, violated any of the state’s occupational safety and health standards and if such violations might have led to Peterson’s tragic accident.

Sadly, the tragic circumstances surrounding Peterson’s death are not as uncommon as you might suspect. The North Carolina Department of Labor recently released statistics showing that last year 35 people died in workplace accidents across the state last year. The DOL identified four dangers known as “the big four” that have caused 80 percent of the work-related deaths in North Carolina during the past decade. The leading cause of the work-related fatalities in 2012 was struck-by events with 14. Six workers were caught in/between objects, such as the worker in this case, and five workers died in falls. Four others were electrocuted and six died in other fatal events.

“Mechanic dies after tractor-trailer falls on him in Thomasville,” by Darrick Ignasiak, published at The-Dispatch.com.