Adult motorcyclists in North Carolina would be allowed to ride around the state without a helmet under legislation that was recently approved by a North Carolina House committee. The measure would repeal the state’s mandatory safety helmet law for the vast majority of motorcyclists, something that has safety experts calling for legislators to vote no before it is too late.

The new law would require that motorcycle helmets only be worn if the motorist is younger than 21 or if the motorcyclist is recently licensed. In the case of recently licensed drivers, those with a motorcycle license for less than 12 months would also be required to don helmets. The measure also states that riders without a helmet would have to carry enough insurance coverage to pay for the first $10,000 of any medical bills that result from a possible crash. 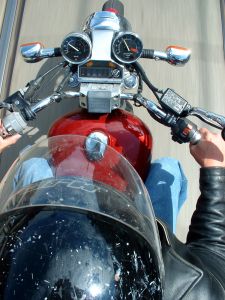 Across the country, 31 states allow motorcyclists to choose for themselves whether to wear helmets. The closely divided vote by the House Transportation Committee moves North Carolina one step closer to joining that group of states. While one member of the committee cheered the results, saying that each person should decide for themselves whether to wear a helmet, another member said that he was worried about the cost that long-term brain injuries might have on the public at large. Representative Rick Catlin said that his life had been saved by wearing a helmet and it worried him that the mandatory safety helmet law was now under attack.

AAA also came out strongly against the measure, saying that thanks to North Carolina’s aggressive enforcement measure, the state is number one in terms of being the safest state in the nation for motorcyclists. The group said it was counterproductive to dismantle the law that has worked so effectively to keep motorists safe. Despite North Carolina’s good motorcycle safety record, things are hardly perfect. Numbers show that between 2007 and 2011, 783 people died in motorcycle accidents across the state.

Thankfully the bill is not yet a done deal. Before the repeal would go into effect it must be passed by the full House and Senate, giving safety advocates more time to sway legislators to vote against the measure. Even if the law does pass, riders in the state should protect themselves by wearing proper headgear, regardless of what the official law requires.