In a tragic case out of North Carolina, a first grade girl was killed after being hit by a log truck driven by a drunk driver who illegally attempted to pass a stopped school bus. The fatal accident took place last Tuesday afternoon as a bus from Sampson County pulled up to a stop along Highway 421.

Police say around 3:45 p.m. the school bus was headed south on Highway 421 with the log truck some distance behind. After arriving at the scheduled stop, the bus came to a complete stop and activated its emergency alert, the stop sign swung out and the lights flashed. Then seven-year-old Alyiah McKenzie Morgan stepped off the bus and was hit by the log truck driven by Johnny Allen Spell. 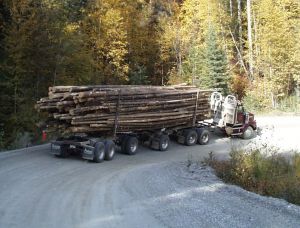 Witnesses have said that the driver of the truck slowed down slightly, but never came to a complete stop and then sped around the stopped bus. Not only did the driver break the law by passing a stopped school bus, but he then compounded his legal troubles by fleeing the scene of the accident.

Police say an anonymous tip led to Spell’s eventual capture. The man was arrested several hours after the crash in Autryville, approximately 35 miles away from where the accident took place. Spell has since been charged with felony passing a stopped school bus, felony hit and run, DWI, DWI while operating a commercial motor vehicle and involuntary manslaughter. Spell remains behind bars on $200,000 bond.

Sadly, such accidents are not as rare as many might hope. In March of this year, a 14-year-old girl in Garner, NC was killed at a school bus stop when a driver in a Pontiac Grand Prix passed another stopped bus. In that case the girl was killed while crossing the road to get to the bus which had stopped and had its flashing lights on. Even more devastating was that the girl’s 16-year-old brother was only a few steps behind her at the time of the collision.

The lesson from these tragedies is clear: slow down and pay careful attention when around a stopped school bus. The law in North Carolina is clear, unless you are on a divided highway, all traffic coming in both directions must stop when a school bus stops to pick up or let off passengers. Trying to race a bus to avoid a few seconds of waiting could lead to disaster and is not worth the terrible risk.