Joshua Peters was streaming the popular online games RuneScape and Clash of the Clans when his ten-year-old brother answered a knock at his family’s front door. 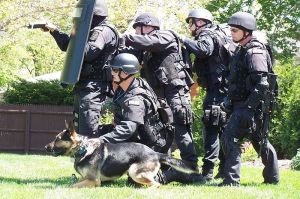 Within seconds, Peters told The Guardian, a London-based paper, his face was flat on the floor and police officers armed with rifles were towering over him. Peters said officers also pointed guns at his mother and little brother.

When he returned to his online games some fifteen minutes after a police SWAT team raided his family’s home, Peters tearfully told the some 60,000 gamers who were online that his mother and little brother could have been shot.

“They could have died,” Peters said, “because you chose to swat my stream.”

The phenomenon of swatting a person’s stream first surfaced in 2011. In so-called “swatting attacks,” hackers are able to track down the addresses of gamers who are using an online streaming service. They then phone the authorities in the victim’s area and report an emergency at the address, causing the deployment of a SWAT team to the gamer’s residence. The term “SWAT” is an acronym for Special Weapons and Tactics. Police SWAT teams are generally more heavily armed than patrol officers and respond to high-risk criminal activity that is often still in progress.

In Peters’ case, a hacker uncovered his family’s address using information on the streaming service Peters was using. The hacker then phoned the St. Cloud, Minnesota police to report an emergency. The hoaxer told police that someone had shot his roommate and now had a gun pointed at the hoaxer. Police heard what sounded like gunshots before the call ended.

Peters’ camera was activated during the raid, meaning the 60,000 gamers utilizing the streaming service could watch the entire event unfold—perhaps even the hackers who committed the prank.

Peters does not think he was specifically targeted. He said he could not think of anyone who would want to prank him in that fashion. He also added that he had witnessed other gamers being pranked in a similar fashion.

St. Cloud police are investigating the incident and are hoping to track down the hoaxer who made the emergency service call.

As The Guardian reports, hyperbolic—or extreme—circumstances presented on emergency calls produce more aggressive police responses. Recent SWAT-team raids have led to the killing of a man who called a suicide hotline for help, to a stun grenade being thrown in a baby’s crib, and to the deaths of several family pets.

Persons injured by “swatting” incidents in North Carolina may have several different causes of action against alleged hoaxers, assuming they can be tracked down and sufficient proof of the “swatting” event can be gathered.