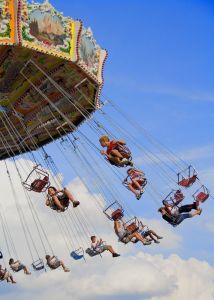 Officials say that given how recently the accident occurred they are not yet sure of precisely how many people were injured. However, witnesses told local reporters that five people, maybe more, were seriously injured when they were thrown from a spinning ride. A WakeMed spokesperson confirmed that five people from the fair were under evaluation by doctors in the emergency room, but could not say how serious their injuries were.

Though details are sketchy, fair officials say that the accident took place on the Vortex ride which is located near the old midway between Gates 4 and 5. Witnesses say that accident took place on the newer of two Vortex machines and that it appears as if the victims fell out of the pendulum-swing ride. One person told a local NBC station that he heard a crashing sound soon after getting off the ride. When he turned around he saw several people lying face down on the ground and the ride’s operator then fell to his knees crying. The entire area surrounding the ride has since been shut down as emergency crews work at the scene of the accident.

Though most people understand that some amount of risk is associated with amusement park rides, many would be surprised to learn just how often serious injuries occur on seemingly safe rides. According to the Consumer Product Safety Commission (CPSC), more than 7,000 people seek emergency room treatment for amusement park injuries in the United States each and every year.

A study conducted by the CPSC found that nearly 21% of those injuries happened on merry-go-rounds or carousel rides, while just more than 10% came from roller coasters and nearly 4% were from bumper cars. The most common cause of minor injuries is falling. More serious and even debilitating injuries and deaths were most likely to be caused by mechanical failures, operator error or design defects.

Fairs, water parks, amusement parks and carnivals offer good fun for millions of families every year. However, fairgoers need to realize that with all the exciting rides comes some degree of danger. These rides are heavily regulated, but mistakes still happen and when they do it is critical that investigators uncover whether defective machines or incompetent personnel are to blame for some devastating errors.