Emergency responders in Charlotte say that a woman is recovering from her injuries after being hit by an Amtrak train in West Charlotte last night. The accident occurred near Charlotte-Douglas International Airport, at a railroad crossing along Old Down Road and Josh Birmingham Parkway. 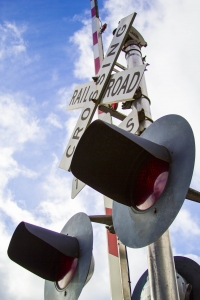 Police say that the driver of the vehicle accidentally turned onto the tracks, though it is not yet known whether her line of sight was clear prior to making the turn. Witnesses say the oncoming Amtrak train collided with the vehicle, dragging it down the railroad tracks before the train finally came to a stop.

Thankfully the train was not moving very fast at the time and the driver of the car suffered relatively minor injuries. Amtrak officials say 153 passengers were on board the train at the time of the accident, but none suffered anything more serious than a scrape.

The more troubling aspect of the accident according to many safety experts in the state is that the incident marks the third time this month that an Amtrak train has been involved in a collision this month. Earlier this week a pedestrian in Mebane, NC was killed when an Amtrak train hit him. Several weeks before that, a woman from Raleigh died after her vehicle was struck by an oncoming Amtrak train.

Though it sounds like an extraordinary run of train crashes, the reality is that vehicle/train accidents are far from rare. According to statistics gathered by the federal government, there were 2,000 individual accidents at railroad crossings last year. Among this number, 235 people died and 900 people suffered serious injuries.

These accidents happen because railroad crossing are dangerous places, even the ones that are marked with signage. The reason that railroad crossings can be so deadly is that many crossings are surrounded by objects that block drivers’ view of the tracks. Things such as buildings, trees or even steep roads can prevent oncoming cars from seeing what would appear to be an easily spotted train.

Given these risks it would seem obvious that railroad operators would install gate arms at as many crossings as possible to minimize the chance of deadly accidents. However, only 35 percent of all railroad crossings across the country have gate arms, an alarmingly low figure. The low rate of gate arm installation is especially troubling given how effective they have been found to be, with surveys indicating that the gate arms are nearly 90 percent more effective than a simple sign.