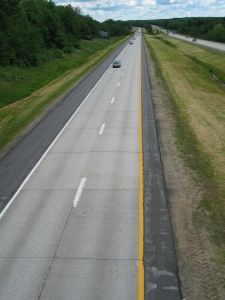 In a tragic story that highlights the dangers that lurk on North Carolina’s roadways, seven people were injured, including two who had to be freed from a crushed car, in a four-vehicle crash earlier this month on southbound Interstate 85 in north Charlotte.

The crash closed the southbound lanes of I-85 for nearly 90 minutes during morning rush hour after the wreck. The wreck happened at almost the exact location as another terrible crash only five days earlier.

A spokesperson for Medic says that seven people were taken to hospitals, including two who suffered life-threatening injuries. Charlotte fire Capt. Mark Basnight said a crew of 35 firefighters spent nearly 45 minutes working to free two injured people from a car that was involved in the wreck. Another car, a smaller Ford, was almost totally flattened against a semi that was part of the multi-car accident.

Apparently a truck that was hauling PVC pipe slammed on his brakes which then lead to the chain reaction collision. An SUV hit the truck which was then hit by the smaller Ford which in turn was smashed by a semi from behind. Finally, a pick-up truck hit the semi from behind.

The week before the chain reaction collision a 47-year-old woman was killed when she was hit from behind by a tractor-trailer. The wreck happened at the same exit off of I-75. According to the state’s highway patrol, traffic slowed suddenly but the driver of the semi failed to notice the rapid slow down, plowing into the back of the SUV and killing the driver.

When family members are severely injured or killed by the negligence of others, North Carolina law affords the right to pursue monetary damages in a civil lawsuit. The process can be a long and complicated fight as your claim may be vigorously contested by the other driver’s insurance company. All the while you will likely be dealing with recovering from your injuries, comforting family members and dealing with the mounting bills associated with the accident.

In the event your claim goes to trial, you will want an experienced attorney on your side. If you, or someone you know, have any questions regarding personal injury claims, please feel free to contact the experienced Charlotte, North Carolina personal injury lawyers at Arnold & Smith, PLLC for a free consultation. Call at 704-370-2828.